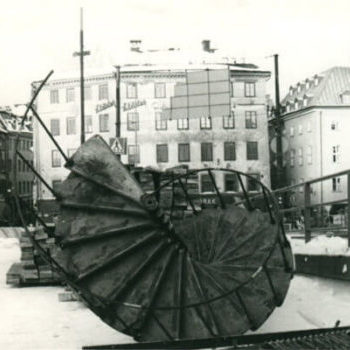 “The Slussen project in Stockholm is today a ruin of the modern movement. After less than a century of life, the place appears in an uncertain and disproportionate way, far from the optimistic and eternal vision of functionalist architecture. Flaking walls, oxidized metals, broken tiles, decadent shops and pedestrians lost in the shadow of the infrastructure show a very different space of that “elegant” prototype declared by the Svenska Dagbladet in 1935 on the built project of Tage William-Olsson. Which are the reasons for the decadence of this urban interstice? Is the original Slussen designed by Tage William-Olsson a wrong project, a failed story? In this article, answers are argued following an intentional trip through some key episodes of its existence: through the traces of sketches ever executed and the variations of the original project, through some images of its inauguration and the subtle details in the bright shopping stores and, finally, through the reading of the proposals presented to the recent international competition in 2008. Perhaps the future transformation of the dying Slussen could learn some arguments from the experience of its own past. ¿Nostalgic view, opportunism, tabula rasa?”