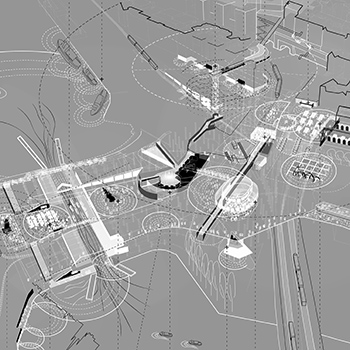 2021·09·20
“Urban cloverleaves: origin, aesthetics, and contradictions of the Slussen, Stockholm”

On 11 October 1935, the inauguration of the Slussen urban cloverleaf took place in front of the excited citizens of Stockholm. It had the attributes of a pure traffic machine taken from the most advanced traffic engineering publications, and it expressed the optimistic cultural modernism that five years ago the Stockholm International Exhibition had promoted.1 This urban cloverleaf was made of translucent glass, reinforced concrete, metallic handrails, and reflective tiles and was meant to solve, in one single gesture, the complex urban link between the Lake Mälaren and the Baltic Sea, between Gamla Stan – the historic city centre – and Södermalm – the southern district built on top of the 35-metre-high plateau. The solution made difficult urban compromises between the foothills of the Brunkeberg topography, the smooth water surfaces of the Stockholm archipelago, the architecture of the historic urban tissue, and the demands of a complex articulated mobility. Boats, goods, suburban trains, subways, trams – later buses – pedestrians, cyclists, and automobiles finally converged on this place at different levels, completing the intricacies of a threedimensional geometry which, for the first time in history, was inserted into a compact city.