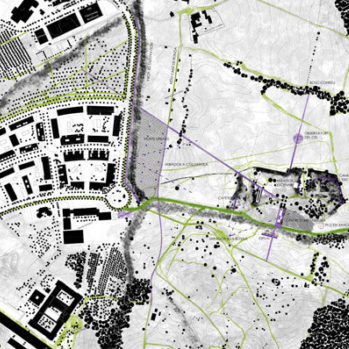 EFUF 2017 Conference: “Urban Forest Boundaries. Within, between and beyond the city”
Barcelona, 31st May- 2nd June 2017

Objectives
In the shade of the Collserola range, near the old road that links the Roman Barcino with the hinterland of the Vallès, the natural environment of Torre Negra has for almost thirty years now been one of the most endangered and fragile spaces. Here we can see the confluence of ravines and the Sant Crist and Riera de Sant Medir rivers, one of the last areas of farmland near Collserola Park, the historical, symbolic presence of the Torre Negra old country house (which originally served as a watchtower of the Monastery of Sant Cugat del Vallès), the ruins of a ceramic brickyard, modern-day equestrian centres, international schools and tennis clubs. All this under the shadow of the Pi d’en Xandri, a much-loved pine tree measuring some 23 metres tall. This unique local icon, increasingly present in the collective imagination, clearly reflects the contradiction between human pressure for property and the widely shared desire to promote ecological preservation. But while on the one hand the 1987 PEPco (Special Ordinance and Protection Plan for Collserola) defined the area as “agricultural area with landscape value”, the last sentence by the Spanish Supreme Court in 2016 and the Catalan Supreme Court determined that it “does not meet” the conditions laid out in the Law on Natural Heritage and Biodiversity of Natural Spaces, and therefore the area remains subject to property speculation. In reality, though, this burning controversy has served only to leave the superb Collserola area on standby, while positions on either side harden.
This article aims to shed some light onto this difficult issue through an exploratory project carried out by the author of this article with the aim of answering the following questions: What design criteria should be taken into account to solidify an area as uncertain as Torre Negra, where there is insufficient strength in terms of ecological or heritage value, but where there is an underlying interest? What design programmes, guidelines and arguments can be used to reactivate the peri-urban city edges? How can we integrate urban and natural spaces?

Framework
This article uses the so-called research by design technique as its founding methodology, based on the idea that the character of these border areas and Torre Negra in particular, is not just a question of what or, above all, how. The exploration carried out as part of the End of Degree Project at the Barcelona School of Architecture, submitted to Sant Cugat City Council*, gave rise to a number of arguments that might serve as more general considerations. In the background of this work, on the one hand there is Sébastien Marot’s theoretical argument of suburbanism and, on the other, the practical experiences of Portes de Collserola (2012), G. Descombes with Parc de Lancy, Insel Hombroich, the Bagni di Bellinzona of A. Galfetti, B. Tschumi with the acclaimed Parc de la Villette, the thinking and works of Richard Serra and Robert Smithson, and finally the Poetic landscape project by Peter Zumthor in Bad Salzuflen.
*More information on the project at: http://hicarquitectura.com/2012/12/8529/

Results
Both the specific design of the proposal and the programme are the result of a proactive understanding of the site. From the rediscovery of suggestive anthropic traces and unique parts of this forest-edge ecosystem, a double-layered intervention is proposed. Firstly, a system of paths and ceramic brick pavements to help incorporate the space into the Sant Cugat park system and subtly frame certain parts of the terrain.
On this backdrop we can place various combinations of a single prefabricated module to stage various programmes for this specific Collserola Gateway. The proposal therefore serves as a way to crystallise this transitional space through programmes and routes. The character of the resulting architecture is not, however, chameleon-like, but rather we seek to generate value in a place with a strong level of expressiveness, through its material and chromatic strength.
The programmes are scattered across the landscape, connected by new open paths in the clay soil: a cafeteria as agateway; a recreation centre near the river; small pavilions by the gardens; a stage/gazebo in the clearing opened up by the brickyard, and an Art and Nature Centre, open to various possible spatial configurations. Each follows a different timetable, and are therefore designed to merge into the landscape as sculptures when they are closed. The relationship between the scale of a public building, the smaller scale of users and the scale of the landscape is achieved by modulating the construction system. A new furniture for Torre-Negra.

Conclusions
The project will help to clarify a series of criteria:
1. In terms of design and forward planning, the border areas between city and forest should not be considered in a ‘dual’ way but rather ‘analogue’, i.e., more like a transient gradient than a borderline between ecosystems. While ecology continues to demonstrate the natural wealth in ecotones, it is also necessary to ensure urbanism at these points of contact with the city. Activating a place like this is the best way to bring positive external influences to bear on the dynamics of deterioration in these areas. Preservation is not the best way to keep the space alive.
2. The scarce ecological value and heritage of the Torre Negra space shown by official reports make the need for a third way even more apparent, one of “social heritage” as an immaterial asset that nonetheless has a strong present. Design becomes an effective tool to bring out the suggestive but fragile realities of the space, both in terms of nature and the programmes and symbols there. This heritage can reinvent itself.
3. Project completion by phases —paths, pavements, buildings— illustrates a gradual, more sensible way of interacting with the natural environment and rediscovering it. The layout of routes is perhaps the most effective initial tool in incorporating this space into the collective imagination and use. Proper structure makes for proper integration.
4. The programmes that need to be imagined for these spaces must be able to connect the natural dimension with the urban dimension, the seasons and cycles of the former with the timetables of the latter, combining ecology and culture. The proposal raises two important considerations in this regard: a) Beyond the classic model of an “interpretation centre” or visitors’ centre, when the goal is to rebuild a place, it is a good idea to disperse the programmes across the landscape: interpreting nature from within the place itself, placing it in context to make it more understandable. In this sense, the strategy of land art or follies, continues to be the most appropriate mechanism.
b) The peripheral position of these spaces represents an opportunity to install uses that are sporadic but essential for urban life: areas to hold concerts, summer camps, races and cultural events and dining areas at the gates of the park. Trials show that modular, unfolding architecture would meet the needs in periods of both heavy and light flows of people. Promoting this area means adapting to nature’s timetables.
5. Finally, this research allows us to promote design as a potential solution to the complex controversy of reconciling management and interests that have accumulated in these border areas: design and discussions about how to activate a place in a positive way. Management as an instrument for improving our habitats, and not vice versa. 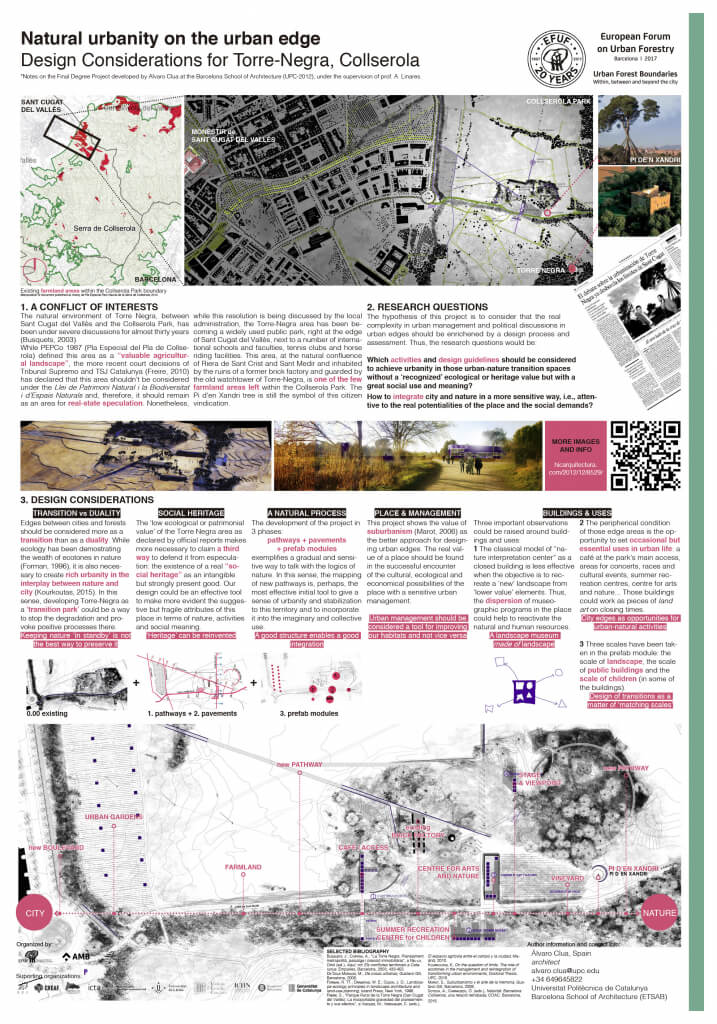