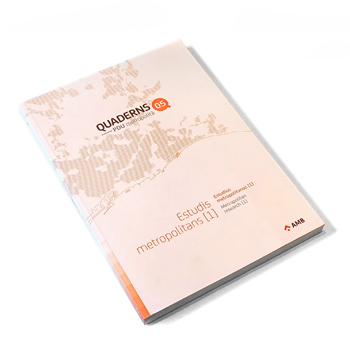 “In the context of the preliminary studies for the Urbanistic Metropolitan Plan, it is particularly interesting to make a close analysis of the specific amendments to the General Metropolitan Plan (PGM). It might seem to be an ordinary planning procedure, fitting, like others, into the complex history of protocols which, basically, has been used to structure the physical construction of metropolitan Barcelona. But its systematic use for various reasons during the years the PGM has been in force has made it an excellent viewpoint for seeing what has happened to us.

Why, then, must we focus on something apparently so specific? Because isolated amendments (mPGMs) have, over thirty-five years, been the channel for expressing and integrating all the new urban policies that have been made according to the political agendas that have succeeded one another on the metropolitan scene. The mPGM has been the instrument that has made these possible, even though they were not foreseen in 1976 or even sometimes contradict was established then. The ordinary procedure driving the PGM has certainly been derived planning, as laid down in the implementation process for general plans, but the route of isolated amendments has allowed a parallel development which has become a natural one. This is demonstrated by the fact that no less than 887 processes have been approved in the PGM’s 35 years of existence! The fact that there have been so many initiatives is the result of many agents from all over the area finding in the process a way of amending the 1976 document without having to interrupt the General Plan as a framework for everyday relationships between individuals and administrations. In other words, in the Barcelona metropolitan area a process of aggiornamento of the PGM without full-scale reform has been followed. The route has been modulation and change through overall recomposition: a system that has produced successively amended texts of the PGM down to today.

This study is a look at mPGMs intended to help make them visible from the point of view of a strategic and geographical understanding of their impact. This research aspires to facilitate the understanding of a vector in the recent history of metropolitan planning in Barcelona in a direction making it operative for the future Urbanistic Metropolitan Plan.”