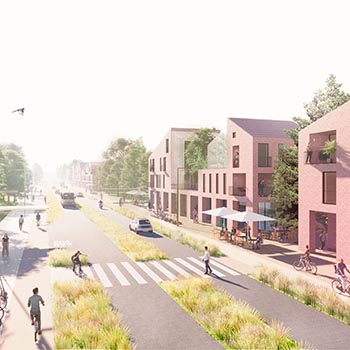 Varberg’s closeby periphery is today an aggregation of housing units connected by an efficient road infrastructure. Trädlyckevägen, Österängsvägen, Vastkustvägen and Värnamovägen work as the main accesses from Österleden to the historical heart of the city. However, these lines are not liveable lines, as they do not work as real meeting places for the residential areas. They are high-speed routes for cars and bicycles, but not living streets for the community.

During the second half of the 20th Century, Varberg developed a modernist-like urban layout, prioritizing the separation of transport modes, the monofunctionalism of each urban piece and the distancing of the urban elements according to security and hygienic standards. These long distances between the elements caused a clear sense of segregation, insecurity and, subsequently, the emptiness of the public space. No eyes are on the street, as no houses directly face these lines.

However, if we look carefully at the road infrastructure, it is worth noting that both Trädlyckevägen and Österängsvägen do not have direct connection from the E6 highway. In consequence, and despite its road-like use, these accesses might be considered future living streets, bringing people together and giving a second-life to Håstens Torg: a new center in the center. Our project aims to give a new character to Trädlyckevägen, transforming it into a living and active street towards Varberg’s city center, a LIFELINE.