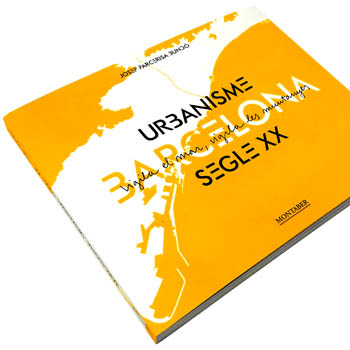 “What have been the general ideas about the growth of Barcelona over the last fifty years? Why were they so controversial? Why is the Metro still the Cinderella of the Metropolitan system? Who extended the Cerdà plan to the River Besòs?
The answer to these questions and many more can be found in this book which explains a century of urbanism in Barcelona, stressing two key periods: the years in which Barcelona was conceived as a capital city and the years in which it was converted into a metropolis. The book closes by raising current topics that have dominated discussion about the city from the turn of the 20th Century and which are crucial to its future.
The architect and university lecturer Josep Parcerisa offers us the keys to understanding the city and its recent history. Throughout the book, the reader will find more 300 images that often speak for themselves. For the first time, the urbanism of the city is explained and can be visualised at the same time.”

Previous: 2013 2nd term Adjunct Lecturer
“Barcelona as an urban laboratory”
Urban Design I · UPC-ETSAB
Next: 2014 article
“Territorial hypotheses after forty years of amendments to the PGM”