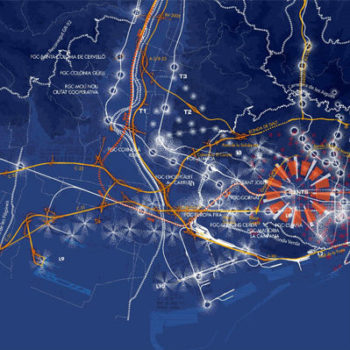 “The period 1975-2015 corresponds to the great growth of Barcelona under the PGM and its development as a large European metropolis.

In these years the urban area of its metropolitan cities has doubled. The transformation has focused on modernising infrastructures, the change of scale of the urban fabric, formalising a new structure of green public spaces and the development of large metropolitan artefacts.”

“The motorways which began to be built in the early 1970s have been completed. Since 1992, the new Barcelona ring roads have profoundly changed how the metropolitan city is used, while bypasses and major roads provide new links to various towns. In urban centres, streets and avenues have been brought under control and urbanized, and the space allocated to pavements and trees has increased. Where necessary, cut and cover tunnels have been built to preserve environmental conditions in overexposed neighbourhoods. The trains remain where they were, but an alternative goods route has been established in El Vallès, and the high speed train network has arrived, with a large station yet to be built. The area covered by the metro network has been extended in the central area, making up for a major shortfall. Meanwhile, trams have been reintroduced as lines providing the network with users. Bicycle paths are providing a new way to travel which is also used in natural spaces and during leisure time. The city is defined by major infrastructure projects and new metropolitan districts. The port and the airport have continued to grow. New industrial estates have helped to improve many working-class neighbourhoods during the various major restructuring processes in the production system. Substantial new squares and avenues have created areas with tertiary activities in the towns. These towns have seen the growth of new neighbourhoods with parks and services, which have also been transformed, with higher density in the central areas. Green spaces related to public facilities have increased everywhere. The large Collserola forest reserve and farming in the Llobregat Delta have remained untouched. Beaches have been revived and riverbanks, starting with the Besòs, have been restored and made available for use by the public. The drainage and water treatment plants network has been overhauled, and the metropolitan metabolism has succeeded in becoming a reliable engineering system, with new incinerators, power stations and waste management areas. The city centre has expanded and its influence has increased, and it remains the precisely beating open heart of this immense organism that we call Barcelona”.